Todays highlight (aside from finding a KFC) was the trip up the Telefériqo up Pichincha Volcano. It was pretty spectacular.
http://en.wikipedia.org/wiki/Telef%C3%A9riQo

I was really not prepared having just a T shirt, no jacket, water or food. When I got to the top I then realized you could take the 3 hour trek to the very top of the volcano. I said screw it and started. The trail was easy, well steep but easy and there were quite a few people around. I remembered reading that the hike can be a bit dangerous due to Ladrones (bandits, thieves) but I have to stop believing what I read in the freaking Lonely Planet.
Anyways, totally unprepared I started the hike. It was amazing. Quito sprawled in all its glory below me and the volcano ahead of me. All was going great until..I became thirsty, light headed, the clouds started rolling in so goodbye sun, hello cold. My ego almost got the best of me to go on but logic said "dont be that guy you read about who dies unprepared on a volcano", so I turned around. There is always another hill to climb!
To practise my spanish I made a point of talking to anyone and everyone while walking which was alot of fun. People really do respond if you make an attempt.

On the way down I rode the gondola with 3 teenagers from Quito. They were talking about me so I sat quietly, then they said, ah American! I just quietly said, No, Soy de Canada!. They looked a bit shocked but then all excitedly started playing thier music from thier phones. Do you know Led Zepplin, Stevie Ray Vaughn, Green Day, Avril Lavine? Boys you had it going on until you said Avril Lavine!!
Well they cranked up the Zepplin and the 4 of us belted out the lyrics to Stairway to Heaven (natrually) in a mix of Spanish, English and la la la las.We got to the bottom and the smallest one grabbed me, Canada, lets go back up (takes about 30 minutes) and sing some more. I laughed my ass off. I took a taxi back to the old town and wandered around (see the KFC reference).

Off I go to Cotapaxi tomorrow. My friend Jenny who I met on the project in Otavalo may meet me there for a day or 2. She is travelling with her friend so we should be able to get in a good hike, then a Whole Lotta Beer (best zepplin attempt I could make).

Other than that, lots of time online today doing research and trying to locate a ship that will take me to Antarctica. There are lots of options and prices, I just have to choose 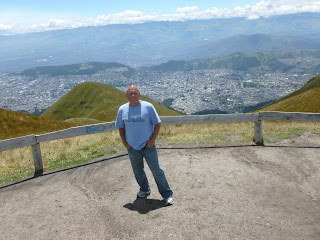 On top of Pichincha Volcano looking down at Quito
Posted by Ken Weiss at 5:13:00 PM No comments:

And so it changes. Eight months of study and preparation for my posting with GVI in Otavalo and I have left the project. Who would have thought?  I have spent many years dealing with corporate control and micro management, I was not about to spend a year doing it in Ecuador.

I have to believe that the expectation was that I would just say, well I am here let’s get on with it. A few years ago I might have, but this journey of mine began a few years ago and the number 1 priority to NOT just do something if I don’t agree with it, or waste precious time waiting for something to end so I can move along. NO is a very powerful word. We don’t use it enough

I have received tremendous support from everyone, including many of the people on the project.
Many said that they respected my decision to leave if it was not working for me, that truly has inspired me (see paragraph above).The FB messages and emails of support has made me realize I am not alone. If I focus on doing what makes me happy, happiness will follow. I think we all have to remember that we are not alone even when we think we are....oddly enough FB helps a lot....stupid good technology.

I have always heard “Sometimes the right decisions are not the easiest". Now I know what that means. Seriously, how easy is it to just shrug apathetically and say “sure, why not?”  Knowing full well that saying NO would have solved that problem. Ah my friend FEAR, it is time to look you straight in the eyeballs and tell you to fu** off!! I have always told anyone who would listen to “Feel the Fear and Do it anyways”. Now it is my turn to step up, so here I go....

All things considered Otavalo was amazing, but today I find myself in Quito, the old town. I am staying at the San Blas hostel where a single room with a shower is $9. Quito is a World Heritage city. It is a magnificent colonial buildings of every colour and shape, surrounded by volcanoes, the highest being Cotapaxi. I took a cab up to La Cima de Libertad. The view was Insane! Quito is so vast it is mind boggling. I was here 5 years ago but this experience is so much better. I did not speak Spanish (compared to my Forrest Gumping of the language now) and was actually pretty nervous to be travelling in South America.

Today most of my time was spent reading and researching where to go in Ecuador. Anyone who has travelled knows how amazing that it. Lonely Planet guide in hand, computer at the ready with a good internet connection makes anything possible. Next up is Cotopaxi National park on Saturday. I am going to stay for three days at Cuello de Luna which looks exactly like somewhere I want to be to decompress a bit. Talk of Antarctica came up and the lights went on!! It is summer in the Southern Hemisphere and travel time in the Antarctic, so... I booked passage on a ship out of Ushuaia Argentina to Antarctica for Nov 29th and I am just waiting for confirmation. Ushuaia is the southernmost city on the planet, sitting on Terra Del Fuego, AWESOME.

Finally for this first post of the new blog a few thoughts (without being maudlin). I have been planning this trip in my head for as long as I can remember. I study maps, stare at globes and read any adventure tale, book or otherwise I have been able to get my hands on. I now have decided this is the time, NOW, RIGHT NOW. Sure I have travelled a bit already as most of us have.  My goal was 100 countries, time to “get er done! I am going to embrace it like nothing I have embraced before. I was thinking that Ecuador is an unlikely place to start all things considered. But when you consider that I find myself at the Centre of the Earth, on the Ecuador it is the perfect place to start. What a romantic start to the epic that is ahead of me. 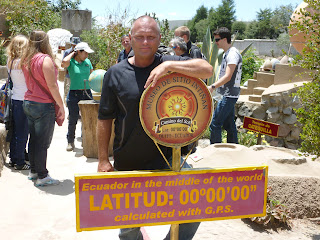 Centre of the Earth