And Into The Oil Patch I Go... 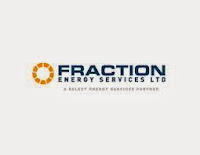 It took a few days but after orientation and the picking up of some gear that included PPE coveralls, hard hat, rubber steel toe (well composite toe) boots, some good gloves, warm socks and Helly Hanson underwear I was ready for my first shift with Fraction Energy Services.

I did have a moment of "Good god, what have I gotten myself into". I have never done a real big boy labour job before. There was the time I was lugging newspapers as kid through all kinds of weather but that's another hardship all together. Anyways I am to report to the company production yard tomorrow to help get it cleaned up and sorted out for a security inspection that is up coming. As with any job or anything I have done it's eyes and ears open, mouth shut and just follow directions. I can usually figure out the process and procedures quick enough. Learning the skills come with time and I have proven that when I actually put my mind to task I excel. Now I just need to move that mind in a whole new direction....well that and this old body because this is going to be hard work.

How did day 1 work out?. I did some sweeping, cleaning and lugging of 6 inch hoses that weighed about 100lbs. Firemen have nothing on me now. I was learning about the systems and had just about as good a first day someone could have. However it was off to Edson Alberta and a real fracking site. I was about to enter the big time of the oil patch. Well enter the Oil Patch I did! On a piece of leased land (rented to drill) there were every type of rig, truck, container, tower, hose, cable and lights. There were also firemen, EMS and Environmental groups. Be careful what you ask for because you just might get hit smack in the face with it and be completely out of your element.....but that is what get the heart pumping and mind racing right. (It's apathy and complacency that kills you, not change.) Just don't do something stupid Ken, listen to what your told and shut the fu** up. You have no opinions today.

After briefings and security meetings the horn went off and we all went to our stations. It was a bit unnerving but nobody else was panicked so I held a brave face. Our job was to fill the massive water tanks (which we did already) from a man made pond that was being refilled by remote water trucks (something I was about to become very familiar with).  The pond was barb wire fenced off because one slip and it would be tough going. We worked inside the fence but used ropes, tethers and had life jackets. We also practiced rescue procedures in case something went wrong. No more dangerous then driving and hitting a moose right? This was a 36 hour process. Oncestarted we monitored the pumps, the hoses and tank flows. It was actually mindless. Sit in a warm truck for an hour or so, get out and walk the line, then repeat. Just a though. Fracking uses quite a bit of water and if we fail the entire Frack shuts down...at $100,000 and hour. That scary thought kept me on my toes.

The next day I was sent to LodgePole, a town near Drayton Valley.  Just north of Lodgepole is the North Saskatchewan River and unless I get called to camp in Ft. St. John,  this is going to be my home for most of the winter. Oh man its going to be coooold! Water for fracking has to come from somewhere and its out job to pull it from the river. This is all regulated by the government including quantity per hour taken.  A large floating pump pushed water about 500 to 750 metres to our station and its emptied in to a large C Ring tank. I do not know how much there is but will find out the volume. This holding tank had drains and returns that run to a multiple valve system from which there are attached 4 inch hoses. Its from these hoses that we fill up the water trucks.

Now I am talking about transport trucks, sometimes lined up 10 at a time. We can fill up to 4 if necessary but for safety we stick to 3. The job is not difficult per say but there are some specifics you have to remember. Example, if you open one valve you must close another and vice versa, always walk the hose and drain it when your done so it does not freeze, and don't fall on the ice! Well I got the hang of it pretty quickly. The trucks pull in, you hook up and chat with the drivers if need be. It seems most are from the East, New Brunswick to be exact so it took no time to start a Maple Leafs/Montreal argument. Anyways, day 2 it was time to do nights. 530 pm to 700 am. There is always 2 during a shift and nights in particular. Well my partner was doing paper work (smoking) and I was out loading a truck when 3 more pulled in. I did not think about it, I just started directing these transports and they fell into line. I was out there standing in the lights of the trucks, attaching hoses, pumping water and stopped for a moment. HOLY SHIT, I was doing it. I am working the Oil Patch Man you can do something if you put your mind to it. Now it I need to get good at it. I have life and work experience on my side and the labour side I can learn. I can excel out here and as it's only going to be a short run here in the patch I am going to get as good as I can as fast as I can.


You can do anything folks. Deaths Coming, Lives Foreplay

A Railroad Engineer, An Oil Worker and A Doctor walk into a bar.... 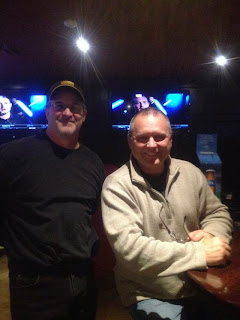 Wait, where is the doctor? Ron Barron is sitting in Cleveland waiting for his orders to move to Ottawa and take of a medical practice there. What a loser!!

But what a great surprise to get a text from my old friend Steve Penygie. He was in town for the day and I needed to get to the pub at the Quality Inn for a pint!. Steve, like so many of us came West from Ontario 3 years ago to find work. He landed a job with the railroads and after a good run he was ready to go home. "We are not 25 year old kids anymore are we Ken". The old Sensi is a wise one. It gave me a good vibe because I have no intention of staying out here for even 5 years so its nice to see someone else not get sucked into the lifestyle and stay the course. Bama and I have a plan and that plan is what keeps me going.

Well during our days in Collingwood as ski bums and bartenders and there was never a pint to be refused. The good Dr. Barron was not far behind when he was not leading the pack. The Blue Mountain years were good years.